NativityMiguel to Honor Mader Construction at Awards Banquet on May 9
Michael Kirwan, one of the earliest supporters of the NativityMiguel Middle School of Buffalo, described the school as a “shining light in making dramatic and lasting changes in young people’s lives.”  It is known by anyone affiliated with the school that those dramatic and lasting changes would not be possible without the ambition of the leadership at NativityMiguel.
Jim Biddle Jr., Chairman and Secretary Treasurer of Mader Construction Company Inc., was among the group of inaugural leaders that set their sights high.  Jim’s involvement at NativityMiguel began with a call from Dan Greer, former Director of Diocesan Youth Services.  Dan asked Jim if he and his wife, Rosemary, would come to the school for a tour with Father Joyce and Father Durkin.  From that day on, the Biddles knew they needed to be a part of NativityMiguel‘s story. 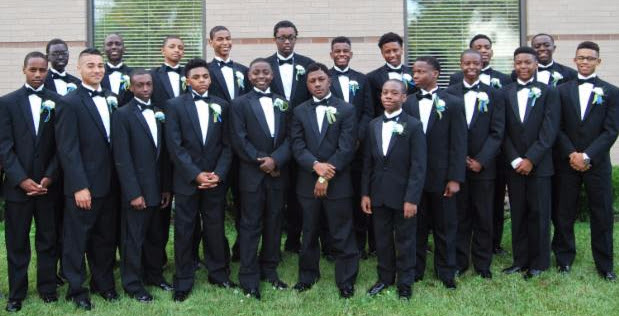 Although Jim and Rosemary committed to their involvement at the school, they did not know what would unfold.  Not too long after the tour, Jim was asked to take on the task of serving as the first Chair of the Board of Trustees.  He came into this role at a time when the school was operating on a much smaller scale.  He recalled sitting in a meeting in September of 2008, listening to the future plans proposed by the leadership thinking, “how are they ever going to make this work?” But right before Jim’s eyes, he watched the school rise to new levels.  To this day he continues to be astounded by the loyalty and generosity of the many friends and benefactors who have helped to get the NativityMiguelSchool of Buffalo where it is today.

Jim’s passion and enthusiasm for the school has pervaded the values of his entire family.  Rosemary, having toured the school with Jim, had desires to get involved in her own way.  She began a knitting club for the girls several years ago and from there each of their children have volunteered in various facets throughout the years.
Michael Kirwan’s vision and legacy are able to carry on because of the many individuals who dedicate endless amounts of time, talent and treasure to NativityMiguel.  Jim Biddle Jr. and Mader Construction have been among the most loyal of those supporters.  For the role Jim Biddle and his company have played in the success of the NativityMiguel Schools of Buffalo, they will be honored with The Michael P. Kirwan “Shining Light” Award at the Scholars Awards Banquet on May 9th.

If you would like to join us, please visit the Scholars Awards Banquet webpage or contact Micaela Farley for details.
You may also visit the webpage for a preview of our silent
auction items and – new this year – to pre-register for Quick Check Out.
Hope to see you there!  Thank you!