NativityMiguel to Honor Father Sams at Awards Banquet on May 9

NativityMiguel to Honor Father Sams at Awards Banquet on May 9
Fr. Ronald Sams, S.J. will be honored on May 9th by NativityMiguel Middle School at our annual awards dinner with the Mother Mary Lange Award. The award honors those that continue the tradition of service with the poor and those in need, exhibited by Mother Lange and the Oblate Sisters of Providence, the women’s religious order she founded. Fr. Sams has represented the tradition of service for others, especially those in need, throughout his diverse experience as a Jesuit priest.
After being ordained in 1959, Fr. Sams spent a considerable amount of time in the Jesuit mission in Micronesia.   Life in the collection of small islands is extremely different than the world we know. He served the population there by teaching them about Christianity, and about how to live life.  He recalls preparing young men for the seminary and having to work very hard to communicate and teach the importance of punctuality, not exactly a trait inherent to the island life in Micronesia. 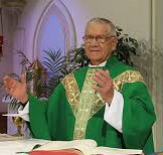 Fr. Sams also had multiple stints at Canisius High School and Canisius College, where he had a strong influence on the school and its students. Those familiar with Canisius have surely heard of Fr. Sams. He was instrumental in starting Gambit at Canisius High School, the long-running and successful fund-raising event, and helped those affiliated with both schools appreciate the qualities of a Jesuit education. Jim Basil, who met Fr. Sams in 1976 said, “Fr. Sams is a perfect example of why the Basil family has been dedicated to Jesuit education and service for three generations.” The Basil family has had 28 family members attend Canisius High School!
In 2003, Fr. Sams became pastor at St. Michael’s parish in downtown Buffalo. Fr. Sams’ major focus over his years there was to be of spiritual service to those who live and work downtown. The parish has made the sacraments readily available and built a strong spiritual community. As the downtown area has seen resurgence in residents, Fr. Sams has laid the foundation for St. Michael’s to become a center for community and service there.
Fr. Sams feels fortunate to have been given a very clear calling to his

important mission of serving others. He recalls, “I never had a crisis. I just followed down the line. Each step [in my calling] was another invitation from God. And I responded.” In addition to God’s providence, he also credits the influence of the priests at St. Bartholomew’s parish and the Jesuit priests at Canisius High School (he graduated in 1946) had on his life. He has repaid the favor by influencing countless others so positively throughout his life.
There is a saying painted on the wall in the classroom used by Sister Timothy Howard, who herself carries on the work of her Order’s foundress, Mother

Mary Lange.  Sister Timothy explains that Mother Lange often referred to the fact that “We stand on the shoulders of those who come before us.”  The students and teachers at NativityMiguel are fortunate indeed to benefit from the strong shoulders of Father Sams and the many people in Buffalo and beyond whom he has influenced throughout the years.  It is because of kind-hearted, generous and talented people like Father Sams that NativityMiguel students are developing the character and strength that will allow them to extend the good works of Father Sams and Mother Lange into the future.  Mother Lange would be proud!

If you would like to join us, please visit the Scholars Awards Banquet webpage or contact Micaela Farley for details.
You may also visit the webpage for a preview of our silent auction items and – new this year – to pre-register for Quick Check Out.
Hope to see you there!  Thank you!

NativityMiguel is Hiring a Vice-President of Institutional Advancement